Home Actualité Amitabh Bachchan thanks fans for their support: ‘The hands that you raise...
Actualité

Amitabh Bachchan thanks fans for their support: ‘The hands that you raise in love and support are my strength’ 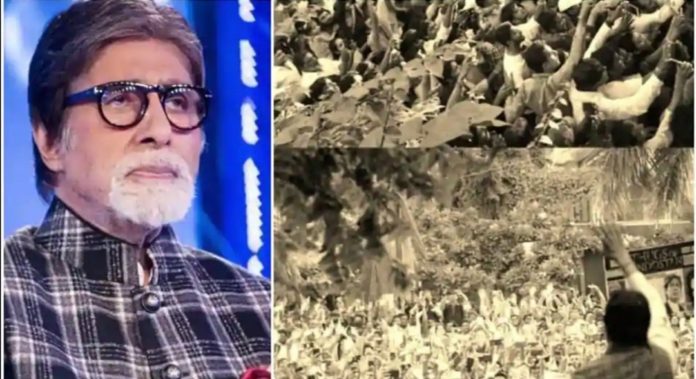 Amitabh Bachchan, on Friday, took to Twitter to thank fans for their continued support as he fights the deadly coronavirus in a Mumbai hospital.

Actor Amitabh Bachchan, who is currently admitted at Mumbai’s Nanavati hospital after his Covid-19 diagnosis, tweeted on Friday to thanks millions of his fans for their continued support. He called it his ‘strength’.

He tweeted to say: “The hands that you raise in love and support are my strength .. this I shall never ever allow to vanish from my system .. so help me God!” The picture was a collage from his weekly Sunday meet with his fans outside the gates of his Mumbai home.

His fans sent him good wishes and prayers; one replied: “Prayers. Get well soon sweetest Amit ji and all your charming family Many Love always .” Another fan said: “God will be there for all who need” – Allah bless you shahinsha allah make you. Stronger than virus allah make you back home. With your family with heather & happy days amen.” A third Twitter user said: “Quiek Recover and Good Health. Get well soon. Love and respect.Take care dear my God. And Bachchan’s family.”

Amitabh has been fighting Covid-19 since earlier this month. On Thursday, a news channel had reported that he had tested negative for the virus. He had written: “This news is incorrect , irresponsible , fake and an incorrigible LIE !!.”

The actor, his son Abhishek, daughter-in-law Aishwarya and granddaughter Aaradhya had tested positive for the virus. While Amitabh and Abhishek were immediately admitted to the hospital, Aishwarya and Aaradhya too got admitted after they reportedly complained of breathlessness.

Amitabh is, nonetheless, active on social media from the Covid-19 ward. Couple of days back. He had felt overwhelmed on knowing that his late father and celebrated Hindi poet Harivanshrai Bachchan’s poem Madhushala had been recited at a function at Poland’s Wroclaw city.

Amitabh, who is one of the most active senior actors on social media, shares a video of the recital of the poem which took place in Wroclaw after it was termed the UNESCO City of Literature. “I am moved to tears! Wroclaw, Poland was awarded UNESCO City of Literature, today they organised a recitation of Babuji’s Madhushala by University students on the roof of the University building,” he tweeted.

“They pass the message Wroclaw is a City of Dr Harivansh Rai Bachchan,” his tweet further read. Earlier in December 2019, the 77-year-old actor had gone to Poland for attending a prayer ceremony which was held in one of the churches to honour the celebrated literary figure.