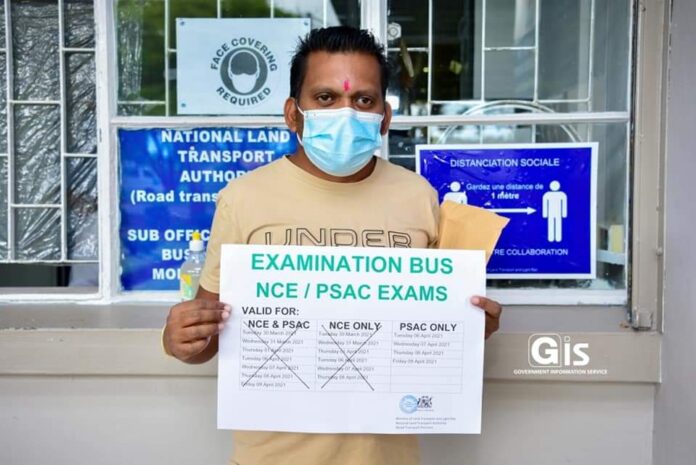 • Vehicle owners/drivers of contract School 15-seater buses, who will be allowed to operate during the National Certificate of Education (NCE) as well as during the Primary School Achievement Certificate (PSAC) Examinations, collected their respective stickers, this morning, at NLTA offices in Cassis and Forest-Side. Stickers will be issued to some 1 408 licensees.
• Those vehicle owners/drivers operating within the Green Zone were granted a Green Sticker, that was collected at the National Land Transport Authority (NLTA) Office at Cassis.
• Those who reside and operate in the Red Zone were provided with a Red Sticker, that was collected at the NLTA Sub-Office at Forest-Side.
• The Minister of Land Transport and Light Rail, and Minister of Foreign Affairs, Regional Integration and International Trade, Mr Alan Ganoo, was present, today, at the NLTA Sub-Office at Forest-Side to take stock of the conditions within which the exercise is being carried out.
• The Minister underlined that vehicle owners/drivers of contract School buses residing in the Red Zone were convened at the NLTA Sub-Office at Forest-Side, to avoid any circulation outside the Red Zone, as a sanitary precautionary measure.
• As PSAC and NCE examinations will be starting as from tomorrow, these operators will be authorised to operate within the Red Zone subject to their vehicles bearing a Red Sticker issued by the NLTA.
• As regards the partial resumption of economic activities as from the 01 April 2021, the Minister underlined that some 200 000 WAPs will be issued. Public transport and individual bus operators will thus be fully operational to ensure frequent and safe commuting. The current prevailing strict rules for residents of the Red Zones will still be applicable.
• Minister Ganoo called upon all public transport owners and drivers to observe the strict sanitary protocols including wearing of face masks, and making provision of hand sanitisers and physical distancing arrangements. As for passengers, he recalled that they should act responsibly and have the legal obligation to abide by sanitary protocols on the premises of bus-stations and while travelling on the public vehicle.
• All those who face any transport issue can call on the Hotline 8923 for assistance.