Magpies beaten into submission and knocked out of FA Cup 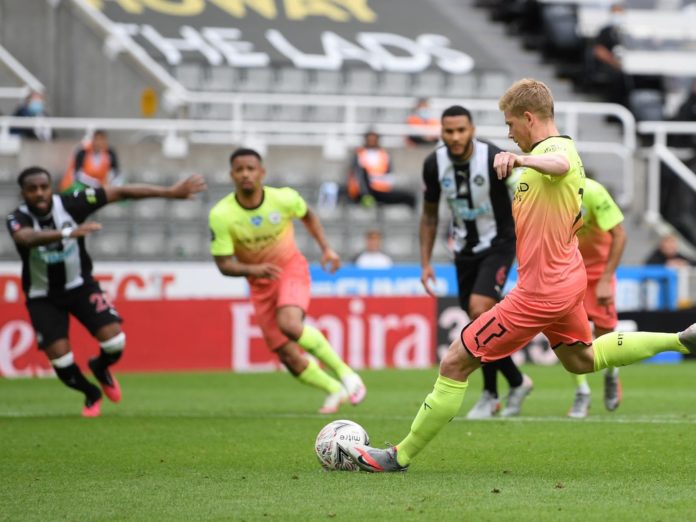 Newcastle 0 – Maanchester City 2. Utter Domination by the reigning champions gave the match a feeling of inevitability as City booked a semi-final tie with the Arsenal at Wembley.

Styles might make fights, but they don’t always make competitive football matches. Newcastle United’s 65-year wait for domestic trophy will continue and Manchester City will play Arsenal in next month’s FA Cup semi-finals after what was at times a ludicrously lopsided quarter-final at St James’ Park, with Kevin De Bruyne’s penalty and Raheem Sterling’s fine goal making the difference.

It is only two-and-a-half years since a Premier League fixture between these two teams on the same ground was so one-sided that it was described as a “joke”, an “embarrassment” and “not acceptable” by those watching on in the Sky Sports studio. City had 83 per cent possession at half-time that night, ending the night on 78.

They went into the break on 82 per cent this time and finished with 76 per cent overall, though it often felt more uneven than that meeting in December 2017. There were points during the first half when you had to remind yourself that these two teams were playing the same sport, and the limitations of automated crowd noise were laid bare when no ironic cheers met Newcastle’s few touches of the ball inside City’s half.

There is more than one way to win a football match of course, and any criticism of Steve Bruce’s approach would be short-sighted, failing to take into account the gulf in talent that any sensible manager would attempt to counteract. Newcastle held out admirably for a while too, but it always felt inevitable that City would eventually break through, and Bruce will be frustrated with how easily his side’s resolve was broken.

Towards the end of the first half, City were awarded a penalty after Fabian Schar needlessly pushed Gabriel Jesus in the back. It was the type of incident that may have gone unnoticed had St James’s Park been full but referee Lee Mason was alert and pointed to the spot. City’s penalty record could be described as patchy at best this season but, on his 29th birthday, De Bruyne scored his third successive spot-kick having taken on the duties in February.

The error by Schar was so out of step with Newcastle’s otherwise disciplined defending that you could only assume he had grown bored of sitting deep and soaking up pressure. He was not the only one. A change was necessary and Bruce moved Schar to the base of midfield at half time, allowing Sean Longstaff and Isaac Hayden to press City further up the pitch. Something resembling a contest subsequently broke out and resulted in one golden opportunity for Newcastle to level.

Nicolas Otamendi’s wayward attempt to play out from the back deserved to be punished and was pounced upon by Alain Saint-Maximin, the only Newcastle player to constantly threaten City’s hold on the tie. The winger stood up Kyle Walker and squared to the edge of the six-yard box where Dwight Gayle was waiting to convert but, having only been introduced as a substitute a minute earlier, he shanked his first-time attempt over the crossbar.

Newcastle’s safety-first approach meant they could ill afford to waste that sort of opportunity and, minutes later, Sterling ensured that City’s supremacy would be rewarded. The 25-year-old has suffered something of a barren run in front of goal during the second half of the season but his second goal in 14 games was sweetly-taken, stepping inside from the left and curling low around Karl Darlow’s outstretched hand.

It would be wrong to say that the 2-0 score line better reflected City’s dominance. For that, Pep Guardiola’s side would’ve needed five or six, though they will make do with another domestic cup semi-final in a season that could yet end with three major trophies. For Newcastle, bruised, bloodied and beaten, the long wait for just one piece of silverware goes on.