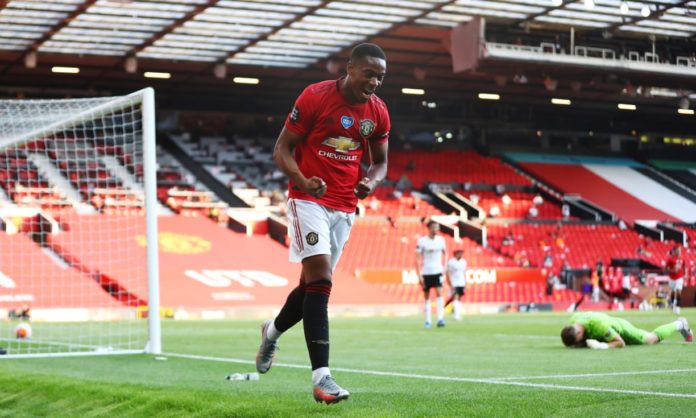 Anthony Martial is the first Manchester United player to score a hat-trick in the Premier League since 2013. Photograph: Michael Steele/NMC/EPA

It was also the Frenchman’s inaugural career hat-trick, moving to a best ever tally of 19 in all competitions for United, who stretched their unbeaten run to 13 matches and took their points tally to 49 with seven games left, two behind fourth-placed Chelsea, who play Manchester City on Thursday. Of Martial, Ole Gunnar Solskjær said: “I’m very happy for Anthony, it’s a shame he couldn’t celebrate without fans.”

For this first home game of the restart the manager selected close to United’s strongest side with only Scott McTominay missing: he was rested, Nemanja Matic coming in. This meant Paul Pogba broke a 10-month wait for a league start and was paired in the starting XI with the effervescent Bruno Fernandes for a first time.

Chris Wilder made five changes from Sunday’s 3-0 loss at Newcastle, of which Simon Moore for Dean Henderson was enforced due to the latter being an on-loan keeper belonging to Manchester United.

In an Old Trafford draped partly in a mosaic made from the 40,000 images uploaded from United fans from 193 countries, United’s opener was slick.

Aaron Wan-Bissaka took a throw on the right and when Martial challenged the ball ricocheted to Marcus Rashford. As he can, the England man turned on the pace, glided beyond the visiting defence and fired a low ball in which Martial finished in the kind of sniffer’s strike that Solskjær likes. “I was very pleased with that one,” said the Norwegian.

There could and should have been a second when a David de Gea ball to Rashford went on to leave Martial racing at Moore. When he might have taken a shot, Rashford was found instead yet from close-in an open goal was missed.

United were ascendant. Rashford slipped in Luke Shaw and he was fouled. From an angle on the left Fernandes’s free-kick dipped and Moore had to beat it away. Next, Fernandes fed Rashford who found Pogba and his dink back to the forward was again stabbed at when composure was required. Then Harry Maguire headed past Moore but was adjudged to have leaned on Phil Jagielka.

The home side now went to sleep, though, allowing John Lundstram and George Baldock to probe along the right. When the former was able to let fly from 30 yards it sailed over but De Gea still administered a rollicking to his teammates. After Maguire later informed Shaw to “fucking switch on” when Lys Mousset tried to pickpocket him, United finally did awaken.

Wan-Bissaka left Enda Stevens trailing, zipped the ball in and Martial did the rest in a carbon copy of his first. This came close to half-time yet Solskjær remained unhappy at the interval due to a lack of ruthlessness.

“We could have and should have scored more [by then],” he said. For the second half Wilder replaced Mousset and Ollie Norwood with Oli McBurnie and Sander Berge. McBurnie had a chance to score when Chris Basham crossed but Wan-Bissaka blocked the header.

Solskjær had Rashford and Mason Greenwood, who were nominally on the left and right flank, switching sides, and it was from such a move that the latter, with his lightning back-lift, took aim at Moore’s goal, Jagielka doing well to kill the effort.

Sheffield United had been backed into a game of unwanted defence in and around their area. Rashford, Martial, Matic, Pogba, Fernandes and Greenwood were a blur of red, pin-balling passes around their white-shirted opponents at will.

Suddenly Pogba took charge, nutmegging Berge, rolling Jagielka and Baldock, before running into a crowd. Martial inadvertently dispossessed him, and shot to no effect.

All of this had Maguire relaxed enough with the team’s play to ghost forward near the penalty spot and try a header from a Shaw delivery before Martial’s third, which oozed class. Pogba found Fernandes from close to halfway and he recycled ball to Martial. A one-two with Rashford ensued, then the Frenchman looked at Moore before the cutest of dinks allowed the Blades’ keeper no chance.

United coasted home, Solskjær able to make a quintuple substitution with 10 minutes left that had Pogba, Rashford, Fernandes, Greenwood and Martial all departing. Next up is Saturday’s trip to Norwich City for a FA Cup quarter-final. The Canaries will hardly relish facing them.