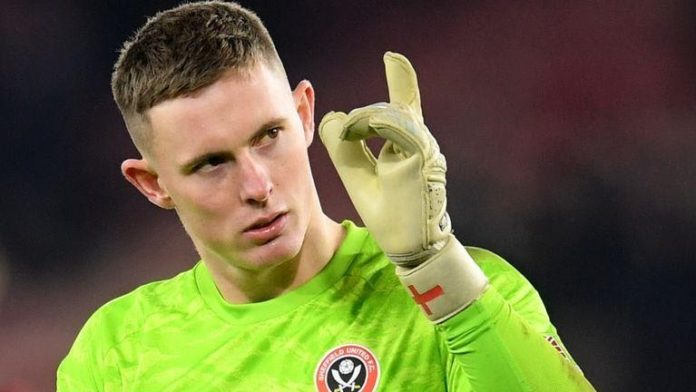 Image: Dean Henderson is back for Sheffield United

Sheffield United boss Chris Wilder hopes to have Jack O’Connell back for the game at Bramall Lane. The central defender, whose attacking overlaps have been integral to the Blades’ success this season, has missed the opening three games of the restart – during which Wilder’s side have taken just one point – after picking up an impact injury in a training match.

Goalkeeper Dean Henderson will return after being ineligible to face parent club Manchester United in midweek, while another key member of Wilder’s back three, John Egan, is available after suspension. Arsenal have confirmed that forward Gabriel Martinelli will miss the remainder of the season after undergoing surgery on a knee injury

While Martinelli will miss Sunday’s FA Cup quarter-final clash, his fellow Brazilian David Luiz is available for selection having served a two-match ban for his red card in the defeat at Manchester City and has since signed a new one-year deal at the club. Matteo Guendouzi is back in the Arsenal squad after being dropped for the win over Southampton with boss Mikel Arteta describing the decision as “squad management”.

Meanwhile, Cedric Soares could make his Arsenal debut having recovered from a facial injury. The 29-year-old made his loan move from Southampton permanent on Tuesday despite having not featured for Arsenal since making the initial switch in January. However, a lack of game-time means it is more likely the Portugal international will make his bow in next week’s Premier League clash with bottom club Norwich.

Facebook
WhatsApp
Previous articleBOLLYWOOD – The week ends with it share of entertainment and controversies
Next articleFOOTBALL – Newcastle United vs Man City ; Pep Guardiola has called the clash ‘a final’